On first impressions I don’t think I come across as a massive geek. I have no doubt that the majority of my non-teacher friends think I get to work at 9am (not that far from the truth as I am rubbish at waking up) and leave at 3.30pm (very far from the truth as I’m often the last person around). My good friends know that the thought of school holidays still makes me shiver in fear; the idea of not having an hour by hour schedule does leave me cold.

Even if I do get home earlier than usual I spend most of my evenings being even more geeky than when at school: reading, planning lessons and making resources. My hidden geekiness has definitely begun to spread out to the department. My boring emails about the latest exciting website I’ve found or an interesting and new iPad app – that no one can use as they don’t have iPads – are definitely falling on tired ears. Therefore, I have tried to make the prospect of using SOLO sound exciting and have tried unsuccessfully to explain that it’s not just me but real, actual, grown up, qualified teachers who are advocating its use in the classroom! So far…not so good. Perhaps I need to go through my persuasive language lesson myself. The long term plan is to understand it and use it at a level where I don’t mind people coming to watch and learn to. I have realised that it is only really in the lesson that you see SOLOs potential, and I certainly, have not seen its full potential yet.

It is only thanks to the wonderful blogs by Tait Coles and James Theobald among others, that I have any idea what SOLO is about or how to use it. It was a lesson by James Theobald that I used to introduce the ideas to my year 7 class this week. The aim of the lesson was to try and get them to use the terms confidently. Something I was extremely unsure about. It had taken me long enough to understand so I didn’t hold out much hope for my mixed ability 11 year olds. We had recently begun teaching Persuasive Writing to this group. The plan was to use James’ lesson as a basis for this; the idea being you ask pupils to decide whether or not their explanations would be understood by a person who may understand things in a different way. James’ (far more outstanding) lesson is to be found here: Introductory SOLO Lesson.

After a short test on persuasive techniques I introduced the slide asking pupils to explain persuasive language using their current knowledge. I showed them a video of Heston Blumenthal and they thought carefully about what type of person he was and what he would understand. They all wrote down a definition of persuasive language for Heston – lucky him.

Then I introduced SOLO terminology. My highlight being one pupils asking me if I had “Made it all up?” myself! At first I got a lot of blank faces. It was a boiling hot day, in a boiling hot room, with the blinds down so we could see; so yes it did occur to me this probably wasn’t the best idea however, I’d started so I would try and carry on. I don’t know how it happened but we ended up talking about Peacocks. The pupils used Peacocks as an example and we moved through the stages providing more knowledge about Peacocks at each stage! 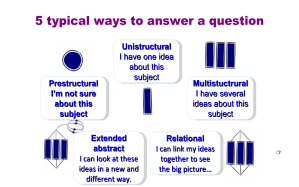 Worried this had only confused matters I carried on with Tait Coles’ X Factor card sort and this really secured their understanding. TOP TIP: USE THEM! The bizarre consequence of this card sort was that the least able pupils managed to grasp each concepts quickly. Some of the most able in the class seemed not only confused, but so ambitious to put themselves in the top bracket as soon as possible, that they missed the point. It took a few rounds of discussion about X factor cards for them to understand.

Once they had got to grips with the language I asked them to assess their current understanding of persuasive techniques. Did they know any? Did they know more than one? Did they know how they could be used and in what context? These questions helped them place themselves correctly and the majority placed themselves in either the unistructural or multistructural stage. I agreed with their decisions and it was made immediately aware to me that for the first time, in a long time, we all knew exactly where we were. With a mixed ability class this tool of assessment seemed perfect.

We went on to look at a number of different persuasive devices individually. Pupils completed worksheets on the device and then with a ‘basketball’ style discussion we worked out what we knew and at what level we were answering. Each time I asked other pupils to rate the answers. Was it a multistructural answer? A relational answer? Or did it stretch to Extended abstract? The best part of this was the way in which the pupils wanted to extend their answers as they realised the most extended thinking was the most interesting and now it seemed achievable. We spent some more time going through persuasive devices with a short task at the end.

I finished the lesson in the same way James’ Theobald suggested. By asking pupils to think again about how they would explain persuasive language to another person (in this case a video of Heston Blumenthal) who at the beginning and end of the lesson they deemed: 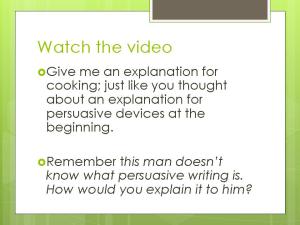 Their answers were, this time, much more specific. Identifying, as James’ pupils did, that it is the way in which you use language that creates the effect. As well as the syntax, quantity, expression and relevance of the words you choose. Their second verbal explanations were far more complex and in depth but it had not seemed in any way, shape or form, difficult to get them there.

Despite the heat (and one girl being sick out the window because of it!) the SOLO lesson seemed to have worked. We all survived the new language and I cannot wait to start using it properly next year and trying my hardest to persuade others to become involved in it too. This isn’t just because I think it’s great; it is because I think if all our pupils use the same language as us we can only move forward. Even if all of that effort to persuade people does mean I still get called a geek in the staff room.

Where the world comes to learn about me and my fabulous teaching.

I want a life that's bigger than me!

Zest for Learning... into the rainforest of teaching

Teaching ideas with a skew towards Maths...

Ramblings of a Teacher

With not even a hint of cohesion between posts

Scenes From The Battleground

"There is nothing either good or bad, but thinking makes it so."

Reflections on Education: a blog by Chris Hildrew

A skeptical science teacher hoping for the best

To teach is to inspire

A journey of education